There seems to be a natural progression in camping gear – swag –> tent –> camper trailer –> caravan –> motorhome.  At least that is what popular culture shows.  And while not everyone progresses through to a motorhome, an increasing number of camper trailer owners are becoming caravan owners.  We were no different.  Having progressed from a tent and swag right through to a caravan, it was a bit of a shock (albeit a welcome shock) to suddenly become tent campers again.  And our tent of choice for this progression of camping gear was The Bush Company’s Black Series Max roof-top tent combined with their 270 XT MAX awning (more about that shortly).

About four weeks ago we took delivery of our new roof-top tent as well as an extended side awning for the Landcrusier, both from The Bush Company.  Although hectic work schedules meant that we have so far only had limited use of both, we did manage a weekend away to test them out.  And having been used to caravan camping for so long, where everything is always at hand, it gave us a chance to reacquaint ourselves with what gear we would need for tent camping (what an eye opener, ha, ha, ha). 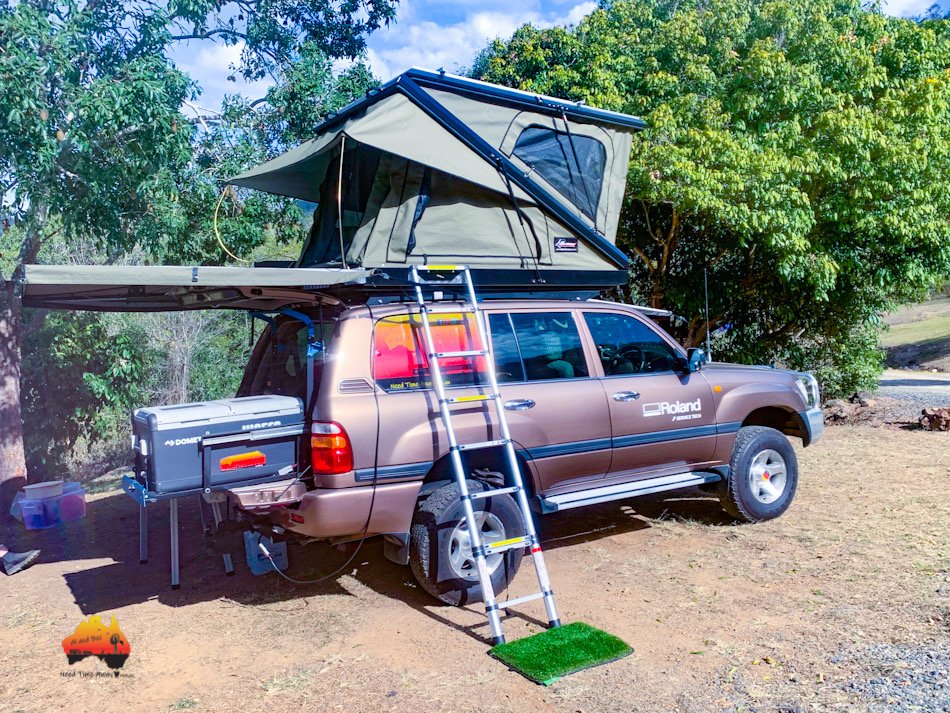 Our initial thoughts on the Black Series Max roof-top tent

I have to say, before we purchased this tent I had never owned a roof-top tent, had never slept in one, and hadn’t even climbed into one before.  So why did we purchase the Black Series Max?  Sometimes there are places that you just want to get to that is impossible with a caravan.  And sometimes you might just want to go for a drive and see where you end up.  Having a tent on the roof is a similar concept to towing our caravan – you can pull up anywhere and stay a night or three.

So why the Black Series Max?  A very good question as there are so many on the market at the moment, many that are much cheaper as well.  We had heard some really good reports about The Bush Company gear, and as they were local to us, we headed over to their showroom to check them out.  After having a long chat with Dean, he showed us the three roof-top tents that The Bush Company has in their range – the Alpha, the Black Series and the Black Series Max.  The advantage for us with the Black Series Max is that it has the added bonus of being able to open up completely, instead of just the traditional clam-shell design.  This means more ventilation and the 360 degree views all around are amazing. We felt that this would suit our needs much better than the traditional clam-shell type.

So our initial thoughts?  Based on one sleep-out camp in the driveway and our time away camping last weekend, I would have to say that we are very impressed.  Once we mastered climbing in and out via the ladder, that is 🙂 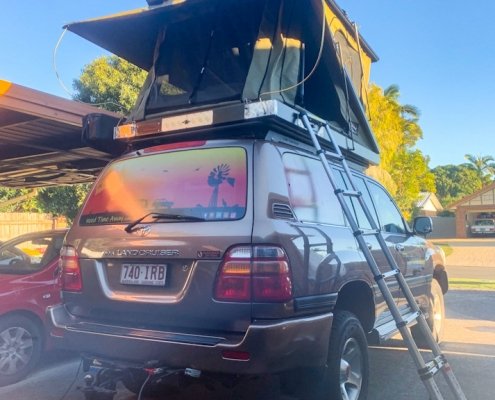 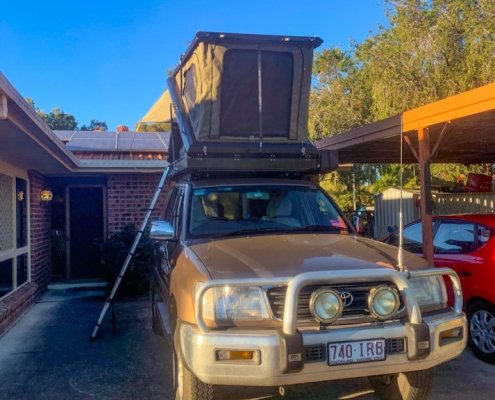 What we love about the Black Series Max:

The hardest part of the whole process was trying to make the bed while kneeling on top of it!  If anyone has any tips on doing this, I would love to know.  We also found the whole ‘what-to-do-with-the-shoes’ thing a bit of a quandary.

The only drawback of the setup that I can see is the ladder, which has quite hard edges.  Due to the angle of the ladder when fitted to the tent, the rungs are at an angle, so walking up and down with no shoes on is not an option (believe me, I tried).  But being a bit of a neat-freak, bringing sandy or muddy shoes into the tent just makes me cringe.  I would love to know what other people with roof-top tents do with their shoes.

So Black Series Max roof-top tent gets a big thumbs up from us!

Our initial thoughts on the 270 XT Max Awning

This awning is so new in Australia that it isn’t even on The Bush Company website yet.  We were privileged to be one of the first few in Australia to have one fitted.  Initially we were interested in the 270 XT awning, being the only true free-standing awning in our opinion on the market in Australia.  However we had always hankered for an awning that extended beyond the front passenger door and covered the entire back tailgate.  All the 270 degree awnings we had seen seemed to lose the coverage down the side.  When discussing this with Dean from The Bush Company, he said that something was coming that may fit the bill.  We ordered one then and there.

Several months later after the design and manufacturing process was complete, we got our 270 XT Max, a truly impressive awning.

Our previous awning was a Kings 2.5m x 2.5m, The reason we purchased this one was we wanted a cheap one to just see how much we would actually use it.  And while it did the job, we didn’t use it as much as we perhaps wanted to just because it needed the poles and ropes to be set up (too lazy for this setup, ha, ha). However with the 270 XT Max awning, setting up is quick, painless and provides an enormous amount of room underneath. And seriously, I mean enormous. 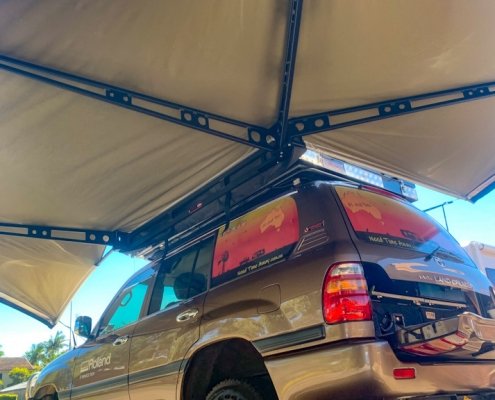 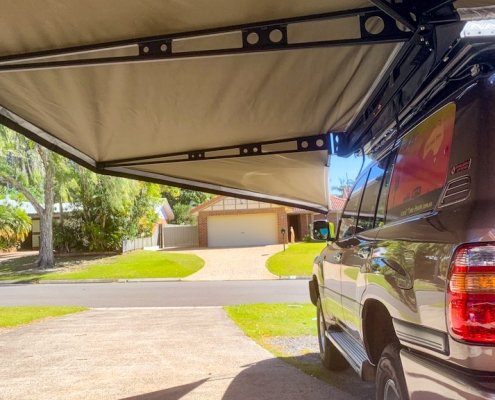 What we love about the 270 XT Max awning:

We are anticipating that we will get a lot of use from this awning.  Already we are using it for shade during a quick lunchstop while working – it is just so easy to pull over and just pop out the awning, then pop it back away before taking off again.

A solid thumbs up for us!

So what is the weight difference?

Have we noticed the weight difference from the old setup to the new?  And does it change the way the Landcruiser handles when driving?

Just a reminder, this is what we went from – this was a heavier setup, something that didn’t sink in until we tried to lift the old setup off the Landcruiser in one piece.  It took us two forklifts (one on either side) to lift it off:

And this is what we have now:

So to answer the question, it’s a big “YES”, believe me. But I don’t know if its just the way the weight is distributed or not, but the Landcrusier actually handles really well and it feels like there is less weight on the roof (even though I realise that isn’t true).

We are new to the roof-top camping experience but can already see endless possibilities and know that we will love it.  While we will always love our caravan travels, sleeping in the tent is simple, easy, and comfortable.  And having the ability to set up ad-hoc, and have the tent and the awning on hand, means that we foresee many adventures ahead. 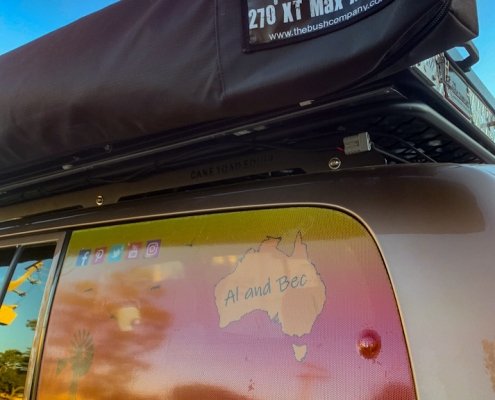 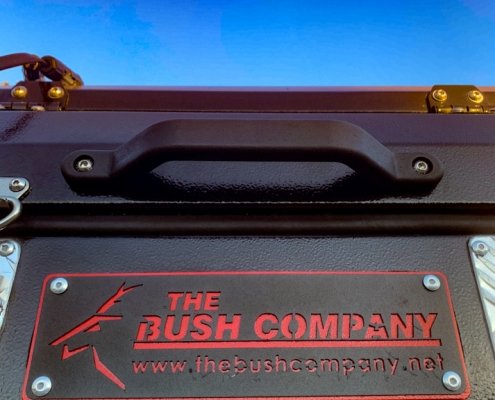 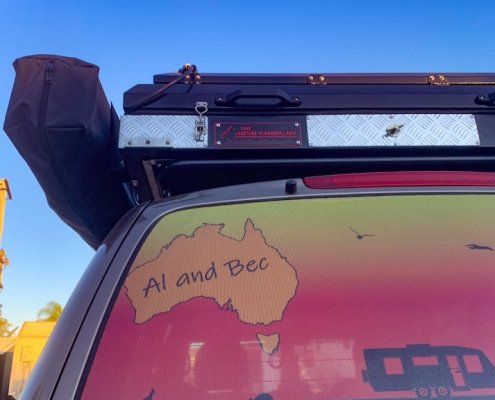 With full disclosure in mind, this is a completely independent review of The Bush Company gear, and Need Time Away did not receive any incentives from The Bush Company for our onions or reviews of these products.

Preservation of your travel photos and videos
Scroll to top