Three years ago, our car nearly blew up…that is to say, it nearly exploded. Why am I telling you this? Because that is the reason why we recently spent an extended weekend in the Scenic Rim in southern Queensland.

A bit of background for those that are unfamiliar with the story. Three years ago we were travelling to Alice Springs from Mount Isa when, upon switching from the main fuel tank to the sub tank, we blew a hole in our muffler. Not a big deal, we organised to get the section replaced in Alice Springs and then continued down to Port Augusta, then up through Broken Hill towards Charleville.

All was going well until mid-way between Augathella and Tambo started to smell burning rubber. As we had just passed a large semi-trailer, we assumed that was the source of the smell. However, when the burning rubber smell quickly changed to burning plastic and started getting stronger, we knew something was wrong. We pulled over and walked around the car.

Strange noises where coming from around the fuel filler. We carefully undid the fuel cap and fuel started to bubble out the filler. The fuel was boiling! Fire extinguisher at hand, Al got underneath the car (something in hindsight I would NEVER have let him do) and found that our recently replaced exhaust had come unbolted and was blowing hot exhaust air directly onto the fuel tank – boiling the fuel! What we didn’t realise at the time was that the melting plastic smell was the result of the burning wiring loom, fuel lines and a whole heap of other components under the car. We were not going anywhere. 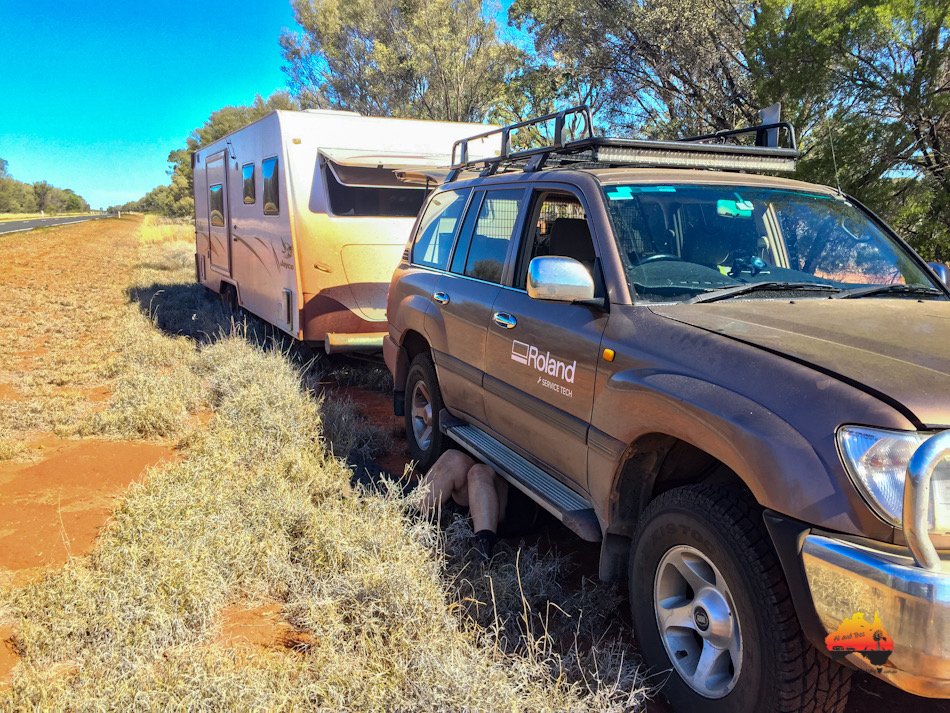 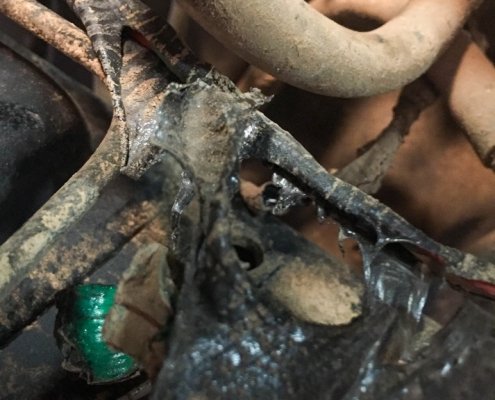 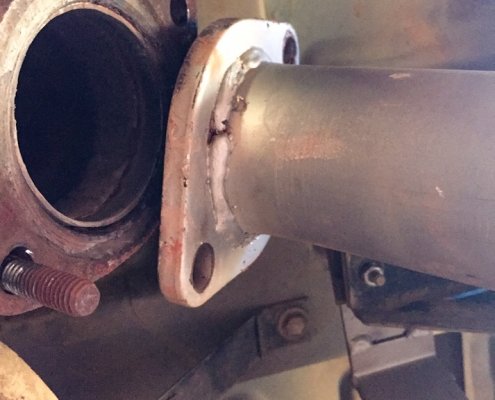 To make a long story slightly shorter, we replaced our broken exhaust system with one from Beaudesert Exhaust – guys that have a solid name in the industry. However, over the last three years we have had nothing but problems, returning twice to Beaudesert and to multiple exhaust mechanics around the country to get it fixed. Bolts were coming loose, gaskets breaking, and welding seams cracking. We even got it completely replaced on one visit to Beaudesert. It was an absolute nightmare – nothing seemed to be working and the exhaust system kept failing.

We travelled down to Beaudesert Exhaust early Friday morning, parking up the caravan next to their workshop, and settled in for what would be a long day. And it was. After 11.5 hours waiting, our Landcruiser was finally ready with new custom built extractors, brackets, mounting points and flex pipe. Our brief was to use it over the weekend, travel about 300 kilometres ensuring we got the engine hot and cold, then return on Monday for a check over. As Al says, “challenge accepted” 🙂

As neither of us been tourists in the area before, we decided to spend the weekend using Lake Maroon Camping Ground, about an hour from Beaudesert, as our base. Arriving just on dark, we quickly set up, prepared dinner, then went to bed. Apparently waiting for nearly 12 hours at the mechanic is tiring work.

Lake Maroon Camping Ground is a bush camp with both powered and unpowered sites. It is broken up into three main sections – the Billabong Camp (where we stayed, with both powered and unpowered sites), Maroon Cove (all unpowered sites) and private lakeside access to Lake Maroon (no camping allowed, but access to the lake for water sports or swimming). They also have a range of other accommodation options. As it was forecast to be a hot sticky weekend, we opted for a powered site so that we had the option of running the air conditioning if needed (Note: Their website currently says that air conditioners are not permitted to be run as the electricity draw is too much. David, the campground owner, advised us that he has had the electricity supply upgraded however the website had yet to reflect this). 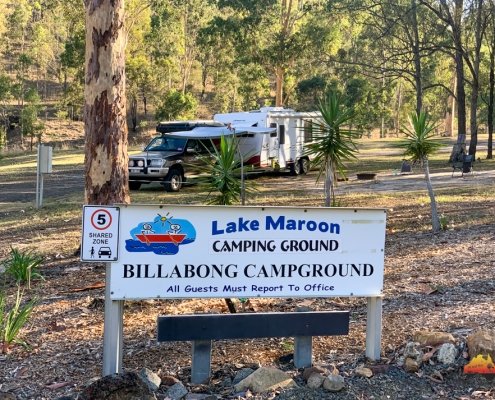 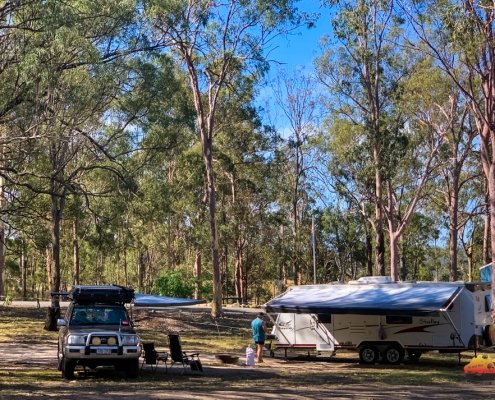 I have to admit that our first impression of the campground was that it was fairly run down and overpriced. However, we quickly revised this assumption when we got up the next morning. It was spacious and quiet, with clean amenities. A well-appointed kiosk has everything you may need (or have forgotten) along with ice and firewood. It was dusty, certainly not the green grass that you see in the website photos, but what can you expect when they hadn’t had decent rain in some time. We certainly had no complaints.

(Moral of the story: never judge a campground when it is dark 🙂).

Following breakfast, we ventured out in the Landcruiser, determined to make a dent in the ‘300km’ that we were required to drive before heading back to Beaudesert on Monday. Not having visited this area before, we started out by visiting the private access point for Lake Maroon, included in our camping fee. Driving right out to the water’s edge (careful not to get bogged in the soft mud, as one vehicle did while we were there) we watched the variety of water sports – jet skis, kayaks, speed boats, wake boards, fishermen, swimmers – you name it and they were there. Everyone was obviously having a great time. We then drove around to the other side of the lake to the public access point. Being a hot Saturday morning, it is easy to see that the lake is a drawcard for those living nearby. 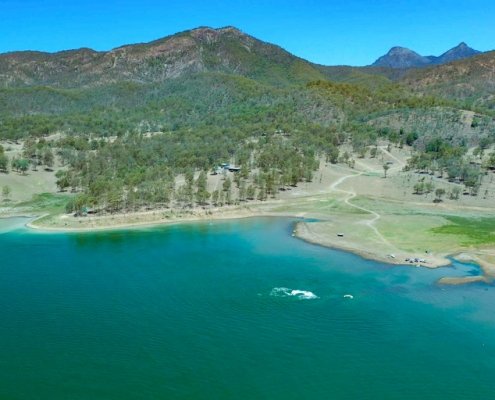 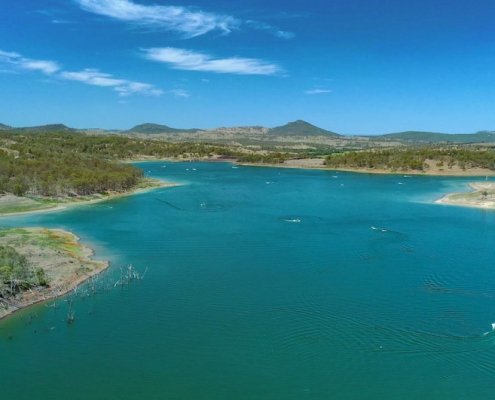 Continuing on with our drive, we drove out to the Mount French section in the Moogerah Peaks National Park. Two short walks from the car park take you to some stunning views. The North Cliff Track is sealed and wheelchair friendly, and will guide you through bushland to an awesome view of the Fassifern Valley below (Logan’s Lookout). The patchwork of fields as far as the eye can see is breathtaking. The second walk, the Mee-bor-rum Circuit, takes you through heathland in the opposite direction and again, to spectacular views. Camping is permitted, with amenities and barbeques – we both made a mental note to return one day to camp in the rooftop tent. 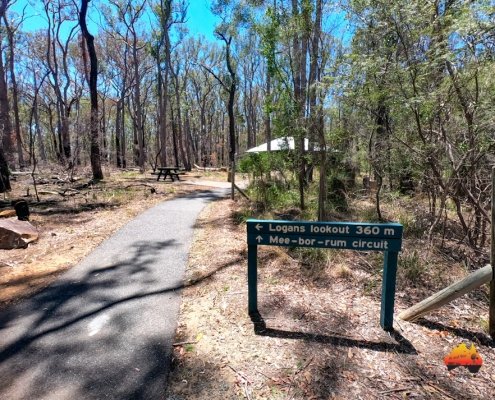 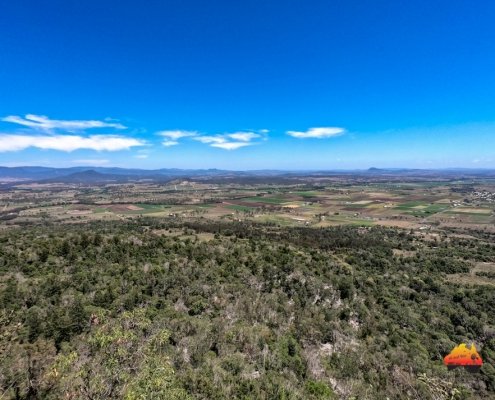 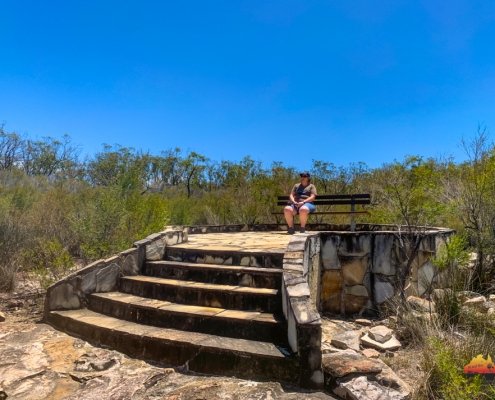 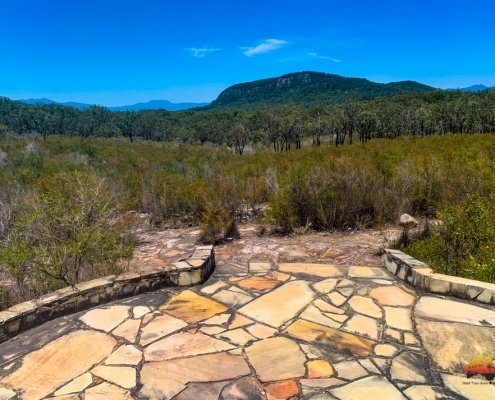 Lake Moogerah and back to the campsite

We completed the circuit by driving to Lake Moogerah, parking just near the dam wall. It was just as beautiful as Lake Maroon. Plenty of picnic tables, most of them in use, is an indication on just how popular the lake is. We really wanted to get some drone footage of the dam wall but with so many people about, decided to come back early the next day instead.

So back to the campsite it was. We purchased some firewood from the kiosk for the evening, and met David, the owner of the campground, who gave us a great rundown of the history of the park and the surrounding areas. David also gave us some great ideas of places to visit in the area. We seriously needed more time than what we had!

Some music, some drinks and a fantastic campfire rounded off what was a really enjoyable day. 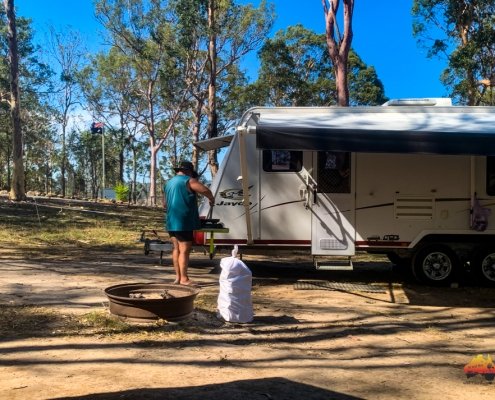 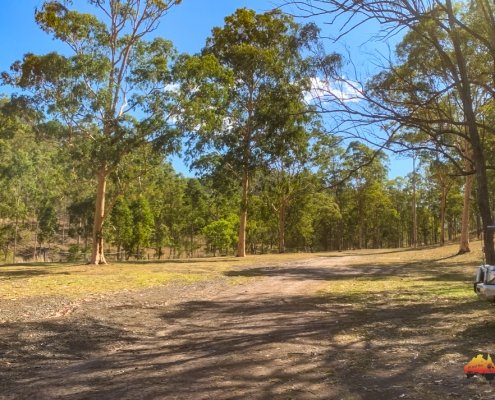 The following morning we left early armed with the makings of a barbeque breakfast and headed straight for Lake Moogerah. We got there about 7am – no one else was yet in the picnic area – and set up for breakfast. Why is it that a barbeque breakfast of bacon and egg sandwiches with hash browns always tastes a million times better when in the presence of a beautiful view? 🙂  And the view was stunning – the backdrop of mountains creates a kaleidoscope of depth and colours.

Following breakfast, Al played with the drone while I went for a walk along the dam wall. For those that are keen, there is a 3km walk to the summit just beyond the dam wall – needless to say, I didn’t make it to the top. 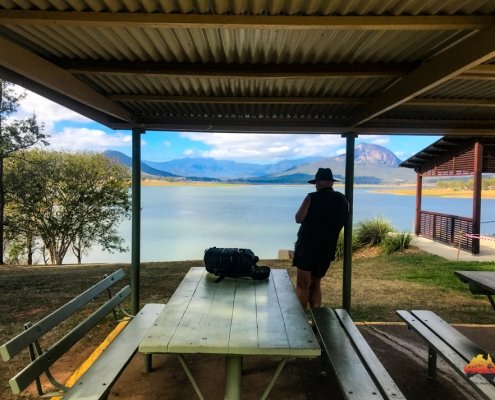 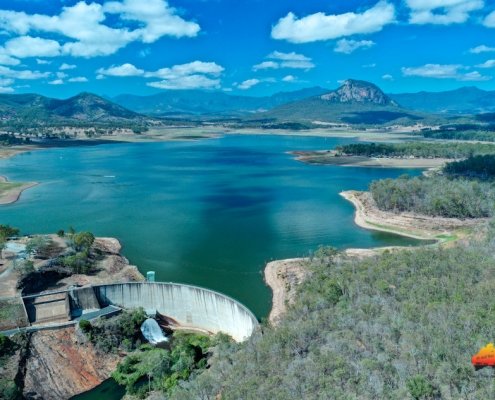 Before heading back towards Lake Maroon, we took the opportunity to also visit the township of Boonah. If you are heading through the area, make sure you take the time to visit the Mt Carmel Lookout, or Bicentennial Place. We were pleasantly surprised to discover an arbour, lush with vegetation, providing a shady place to observe the scenic view of the town. A time capsule commemorating Australia’s bi-centenary year is also located at the base of the arbour. Placed in 1988, it is opened every 25 years, with the next time scheduled in 2038. 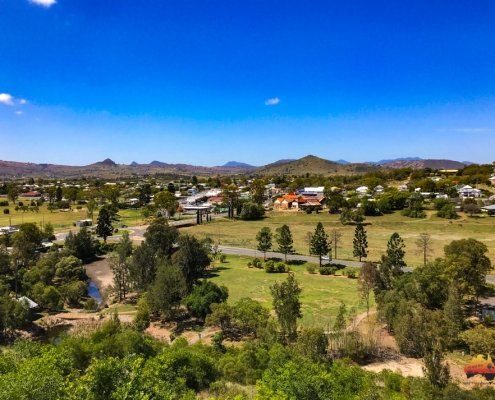 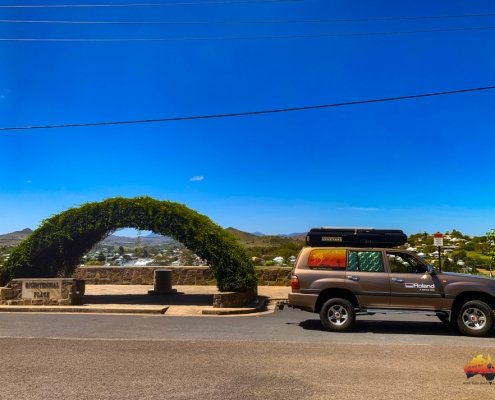 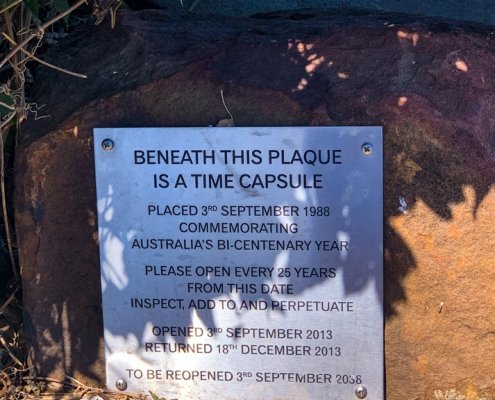 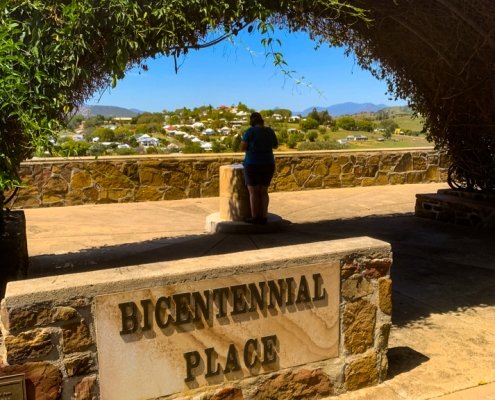 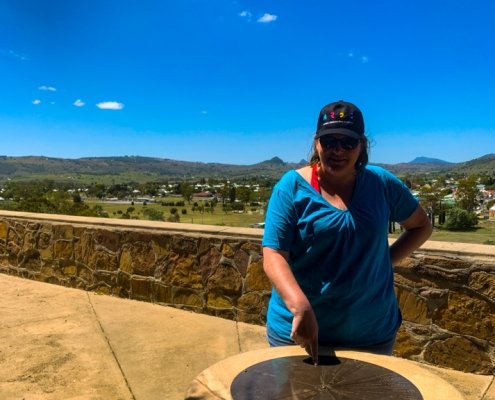 On the way back to Lake Maroon we took a detour up towards Mount May. The previous day the campground owner, David, had recommended a lookout accessible via 4WD only that climbed the range behind the campground. Driving through cattle properties, we passed through Waterfall Creek Reserve (which obviously used to allow camping but now only serves day visitors) then began a steep 4WD climb up the mountain range. Some 20 minutes later we arrived at the “Cleared Ridge Parking Area”, and a short walk up the hill we were presented with some of the most spectacular scenery of the weekend. It was definitely well worth the drive. 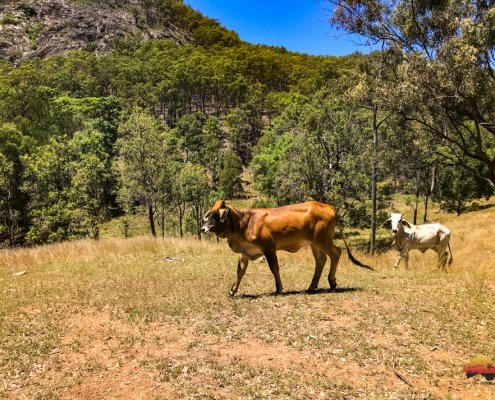 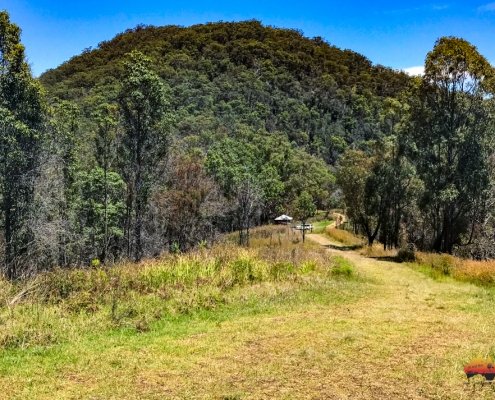 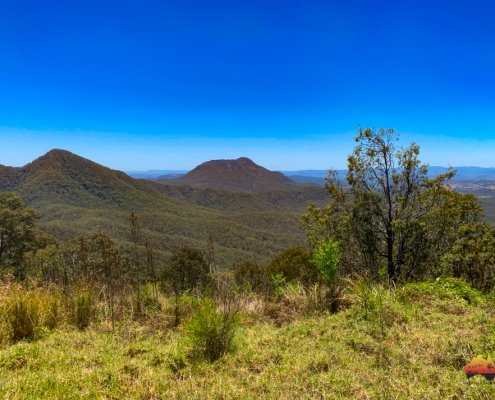 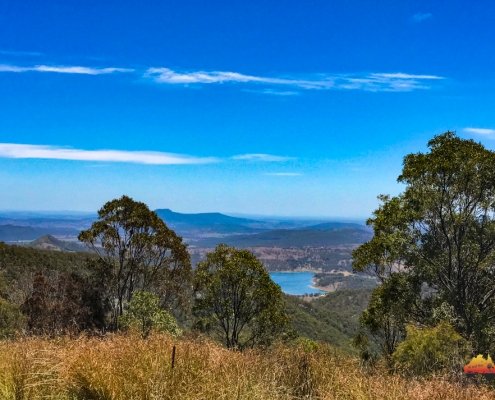 On the way back to the campground we stopped at the private access point for Lake Maroon provided for campers. We folded out the Bush Company awning, got out the camping chairs, and had a drink or two while taking in the activities on the lake. A perfect way to relax and finish off the day. When our bladders could no longer wait, we packed up and headed back to camp. 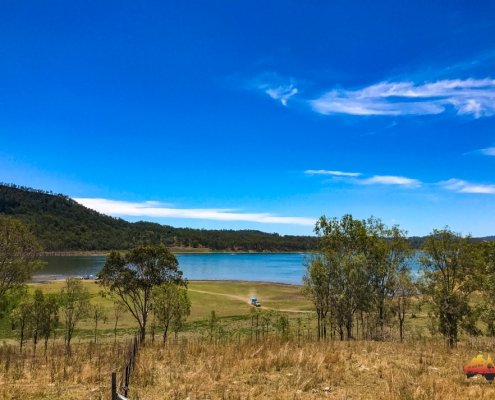 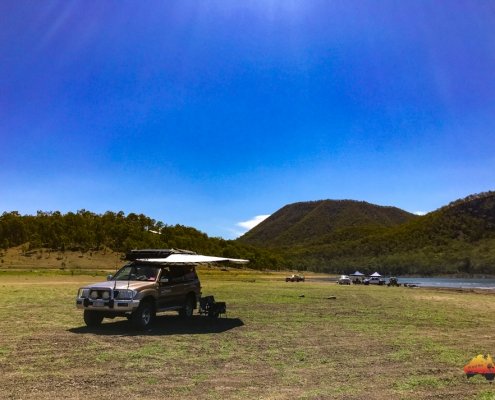 Being a Sunday night, we were just about the only campers left in the campground. David joined us for a beer or three, regaling us with stories of his work overseas while we enjoyed the campfire and night.

Monday morning, early (4:45am!) we pulled out of the campsite and drove to Beaudesert Exhaust, happy to report that the new exhaust behaved perfectly over the weekend. A quick check over and tightening of the bolts by the mechanics and we were on the road again heading home.

We are hoping that our exhaust system woes are over and that Beaudesert Exhaust has finally fixed the issue. Only time will tell. However, if the last few days are anything to go by it is looking promising. And of course, the highlight of being required to spend two days at Beaudesert Exhaust was being able to explore the fabulous Scenic Rim country – we definitely need to return for another visit once the weather gets a bit cooler. 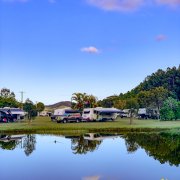 Preservation of your travel photos and videos