We had spent several days camped at Cooper Creek in Innamincka, which we used it as our homebase, leaving the caravan there as we explored the area. However, due to time restraints it was  now time to leave and start heading north to Birdsville for the Big Red Bash, leaving behind so much still to explore (a return visit is definitely on the cards).But which way to head north?  We hadn’t made any firm plans at this stage.  The advice of other travelers as to the best route north was varied and was at times conflicting, with some saying that the Cordillo Downs track was the better track, and others saying that they wouldn’t take a caravan over it, preferring either the Walkers Crossing track connecting to the Birdsville Track, or alternatively going north on Arrabury Road just over the border in Queensland.  With so much contradictory information we were no better informed about which direction we should take.

In the end though we decided to travel north to Birdsville via Cordillo Downs and just take our time and drive to the conditions.  So we left Innamincka in a convoy of three caravans at 9:30am, and started up the Cordillo Downs Road.

And may I say what a drive it was. The other two caravans quickly left us behind in their dusty wake (they were semi-off road caravans whereas ours, a Jayco Sterling, sadly isn’t). So we crawled along at a snails pace, trying to minimise any damage to the underside of the car and caravan.

And we were rewarded with the scenery as it was seriously spectacular.

The majority of the first 139 km north of Innamincka is through the Innamincka Regional Reserve. Covering over 1.8 million hectares, this area was proclaimed a reserve in 1988 in order to protect the integrity of the wetlands, and was the first reserve to permit side-by-side conservation, grazing, petroleum exploration and mining, as well as managed recreational use. 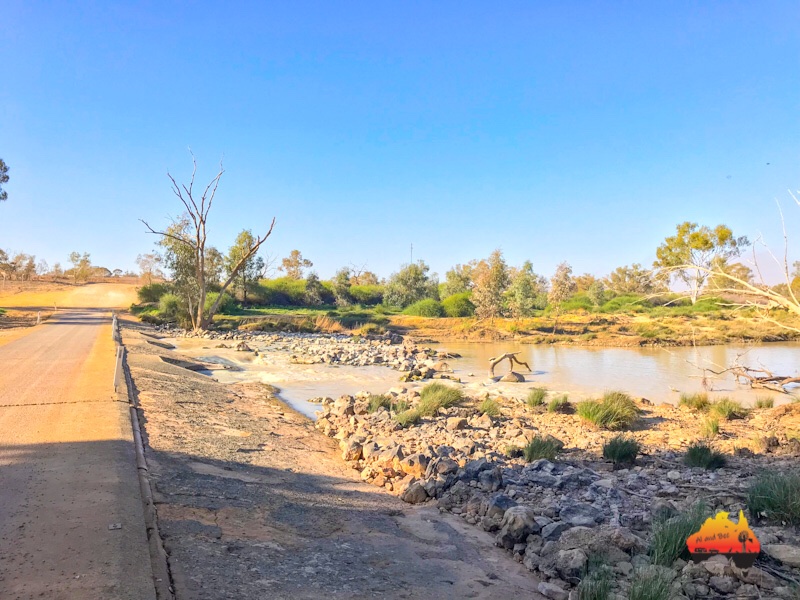 It wasn’t long after we started up the track that we were alerted to a water leak under the caravan by a fellow traveler. We had previously fixed up a leaking pipe under our caravan in Innamincka, a result of our travels from the Dig Tree a couple of days earlier. However this was a new, far worse leak where the numerous stones on the track had shattered the taps on our freshwater tanks.  We also discovered that the piping on our grey water tank had also shattered. Patching it together with gaffer tape (the magic repair tape that should be part of everyone repair kit) so we wouldn’t lose any essential pieces of piping, we pushed on, tentatively, knowing that we would have quite a bit of repair work to do in Birdsville before heading out to the Big Red Bash.

We soon reached the ‘Y’ junction which marks the turn-off to Arrabury Road, should you wish to travel via this route. As we caught up to our travel companions at this point, we stopped here for a quick lunch stop before continuing along the Cordillo Downs Road, and into the Cordillo Downs property.

For a “through the windscreen of a Landcruiser” perspective of the Innamincka to Cadelga Ruins section of the Cordillo Downs Road, check out our video….

During the late 1800s, Cordillo Downs was one of the largest pastoral properties in Australia. In 1888 over 82,000 sheep were hand shorn, with Afghan cameleers taking the wool back to the rail head at Farina via the Strzelecki Track.  In 1903 Cordillo Downs took over the nearby Cadelga Outstation (the ruins of the homestead are nearby) which, due to drought and depression, was completely abandoned between 1931 and 1936. In the 1940’s following a decline in sheep numbers due to dingos and drought, the property switched to cattle.

The shear magnitude of the size of the property is one of the beauties of the area.  Traveling through the gibber plains of the Sturt Stony Desert, the landscape looks like you would imagine the surface of Mars to look – wide open spaces with lots of rock, or gibbers as they are known. The gibber plains originated from desert sandstone which once covered the area. This has slowly weathered and broken down into the sandstone with the harder fragments remaining and forming an interlocking arrangement of stones. It is quite breathtaking and like nothing else we’ve seen in Australia. 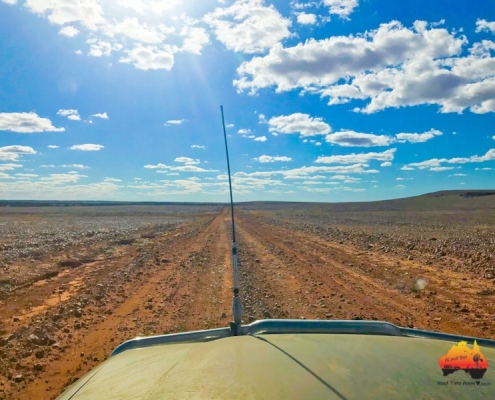 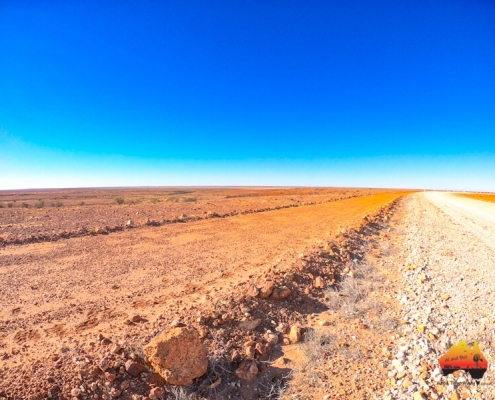 Cordillo Downs is also home to the Cordillo Downs Woolshed, the largest woolshed in Australia. Built in 1883 from sandstone rubble, the Woolshed provided stands for 120 blade shearers and was buttressed in order to support the weight of the vaulted iron roof.  Since the move to cattle in the 1940’s the Woolshed has been used primarily for storage. It is open to the public to walk around, but be mindful that the property’s homestead which is still inhabited sits just behind and you need to respect the privacy of the owners and their families.

As we continued north along the Cordillo Downs Road, we were again struck by the remoteness of the land, and gained an appreciation of how hard it would have been for the early explorers or pastoralists to live in this environment without any of our modern conveniences.

Our travel companions again left us in their dust as they traveled at a faster rate (again, due to having better equipped caravans for the prevailing conditions) while we plodded along, sometimes only at about 20km/hr once again giving us ample time to take in the scenery.

Just before dusk, and about 90 km north of the Woolshed, we arrived at Cadelga Outstation Ruins where we pulled up for the night.  It had taken us over seven hours to travel just 264 km.

The Cadelga Ruins were once the homestead of Cadelga Station, built in 1877 and then taken over by Cordillo Downs in 1903.  The homestead and various outbuldings were in use until the 1950’s when they were no longer required and fell into disrepair.

We arrived at dusk so didn’t have much time to look around the ruins, however there was plenty of space for campers to set up for the night. With approximately 10 other caravans and campers there, it certainly didn’t feel like we were crowded in at all.  Other campers have said that in the ‘off-season’ there is often no other overnight campers. After setting up, and with a few drinks in hand, we enjoyed what was a spectacular sunset.

The morning provided the opportunity to explore the ruins further.  Two stone and timber buildings formed the main house and separate kitchen building, with the remains of two stone sheds to the north and west of the main building.  It also provided us with a chance to look over the damage to the caravan in daylight and perform some minor repairs to get us through to Birdsville. 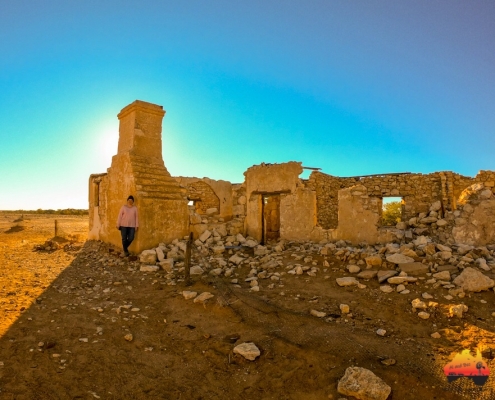 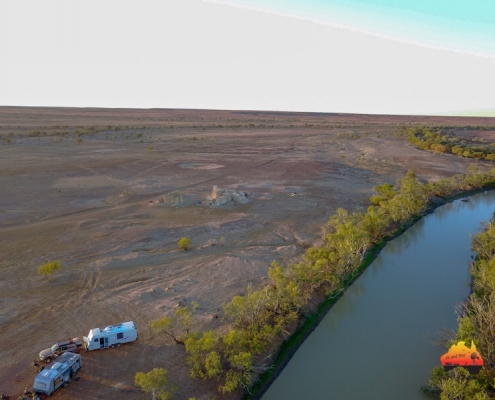 From the ruins it was only about 10 km until we hit the South Australia/Queensland border.  The road conditions immediately improved as we crossed the border, which gave us the opportunity to make up some time and catch up with our travelling companions. 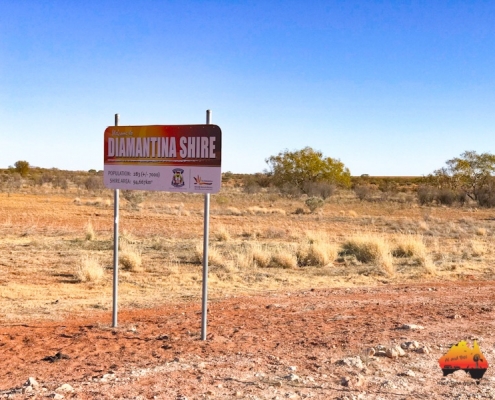 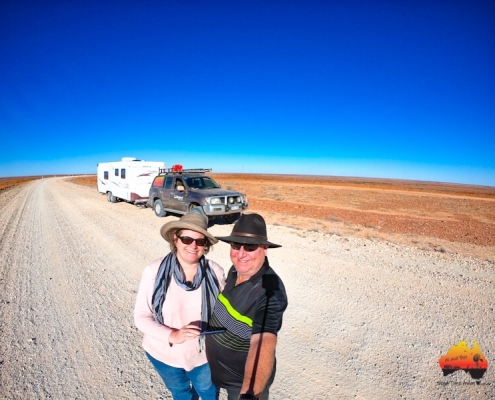 The Cordillo Downs Road joins up to the Birdsville Developmental Road between Windorah and Birdsville, about 118 km east of Birdsville.  The road, while corrugated and dusty, was fairly uneventful after the excitement of the Cordillo Downs track, which wasn’t something we complained about!

Following the floods earlier in the year the countryside was unbelievably green in areas, a stark contrast to the browns and reds of the rest of area.  We joined in with the procession of caravans and campers heading into Birdsville in readiness for the Big Red Bash.  Once we reached Birdsville, driving over the causeway at the Diamantina River was almost surreal after seeing it so many times in pictures during our preparation for the Big Red Bash.

We pulled up in the Birdsville Town Commons and set up camp, along with many other eager campers waiting until we could go into the Big Red Bash. We had a few days free which was spent scouring the one hardware shop in Birdsville for plumbing parts, and visits to the one mechanic in Birdsville to get the bigger repairs done.

In all, 416 kilometers of dirt road make up the Cordillo Downs track from Innamincka to Birdsville, which took us over 10 hours to complete. 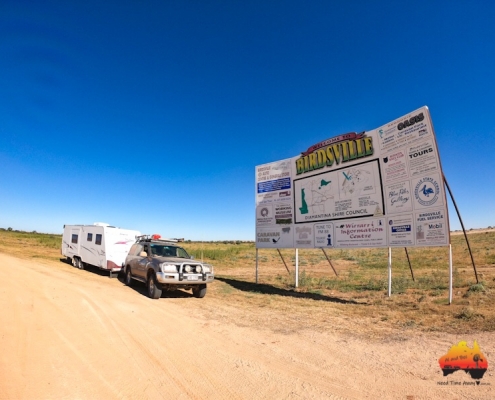 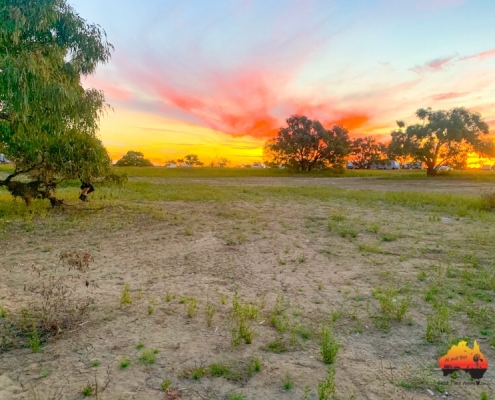 A word of warning

Although the Cordillo Downs track goes through some of the most beautiful country in Australia, it is important to drive to the conditions.  We spent most of the days travelling between 20 and 60 km/hour, trying to protect the underside of the caravan from damage by the stones.  Our travel companions could travel faster due to the height clearances of their caravans, and could average about 60-80 km/hour with far less problems.

While the roads are in pretty good condition, there are a lot of loose rocks and gibbers, some of which are very sharp. It is recommended that you drop your tyre pressure to around 25psi.  This also helps with the ride over the many corrugated areas of the track.

Also be aware that there is a great deal of wire and metal strewn around the ground at Cadelga Ruins, particularly closer to the ruins, so drive in with caution. One of our friends we were travelling with sustained a flat tyre on their caravan due to wire on the ground.

Damage to our caravan from traveling the track included (in spite the covering of all pipes and wiring before leaving home):

Also be aware that fuel is available in Innamincka and Birdsville, but not in between.  Although the distance is only 416 km in total, the rough roads means that fuel economy isn’t as good.  We traveled with jerry cans in order to ensure that we had enough fuel to make it through to Birdsville.

Finally, and it can’t be stressed enough, be aware of the dust. We prepared our caravan for traveling on the dirt roads by applying extra silicone to the gaps and putting dust covers on the vents.  And we still got a fair amount of dust through both the caravan and the Landcruiser.  The dust truly has to be seen to be believed.

Preparation is definitely key … stay tuned for our upcoming post “Our Trip to Birdsville – Preparing for Dust, Dirt and Disaster“. 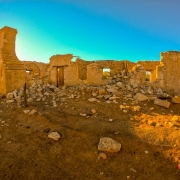 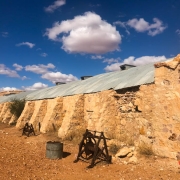 An overnight stop at Warra, Queensland

Apple-‘Mac’ing the choice to keep an ‘i’ on the roa...
Scroll to top